Jip Dekker - Bioenergy from wood waste in the Netherlands

Bioenergy from wood waste in the Netherlands

1. Description of the technology

In this assignment, I will focus on the production plant in Lelystad, the Netherlands. It’s a wood-fired heating plant and produces energy by the combustion of wood chips. These wood chips are supplied from forest maintenance done by Staatsbosbeheer. 80% of the wood chips come from within in the province where Lelystad is located (Flevoland), the other 20% is supplied from other places in the Netherlands. In total, about 22.000 ton of wood chips will be burned to supply 5000 households with heat via the district heating net [1]. Lelystad has 33.271 households in total [2]. The heat capacity of the plant is 15 MWt and with heat buffers, it can temporarily go up to 20MWt [5]. To overcome the morning ramp they use heat buffers that will be charged during the night so there won’t be an electricity shortage in the morning. The morning ramp is mostly between 5 and 7 am when everybody starts getting ready for the day and the electricity used is rapidly increasing [3]. The heat buffers store the produced energy when it isn’t used as much, for example during the night, and then release when it is needed more [4].

The plant in Lelystad uses a water tube steam boiler to create heat [5]. In the boiler, there are pipes where water flows through and around these pipes flue gas passes around. The flue gases are created during the combustion of biomass. The way that works is easy because biomass combustion is one of the first methods ever to produce heat. Oxygen and biomass (in this case wood waste) are combined under high temperatures and create carbon dioxide, water, and heat [6]. The resulting flue gas is between 90 and 150 degrees Celsius, at this temperature the water does not condense and the heat is lost [7]. That’s why there is a flue gas condenser installed, this way the heat can be used more efficiently. This leads to an efficiency of 102%. The boiler also has a multi-cyclone filter to filter out dust that is emitted during the heat production [5].

2. Description of the market

In the Netherlands, 6.6% of all the energy used is produced from renewable sources [8]. The biggest part is produced from biomass; 61%. This is followed by wind power with 25%. The biggest biomass market is in the combustion of municipal waste. The use of wood waste falls under the category of renewable energy from specific waste and accounts for 2% of the total renewable energy production. The market grew between 2003 and 2012 but after a few years, the production declined due to a decrease in subsidies. In 2012 there was a stagnation because the subsidies that were made available around 2003 ended as they had a ten year run time. Not until 2016, it was that new subsidies were made available but there hadn’t been any projects concerning this market realised when this report was published (2017). The production of this market increased with 19% in comparison to 2016 but when compared to the market production in 2005 it is only one-sixth. Especially the production of heat increased in 2017 because of the higher efficiency.

The wood waste is supplied by Staatsbosbeheer, a forest management organisation in the Netherlands. As of 2006, they have an area of 90.811 ha of forest, this is one-fourth of the total forest area in the Netherlands [9]. The number of tons of dry matter per year that can be used for bioenergy production is 557.998 for the whole of the Netherlands. Lelystad falls under the region west and the dry matter there is 63.054 tons per year, which is more than enough to supply the 22.000 tons that the plant in Lelystad uses. 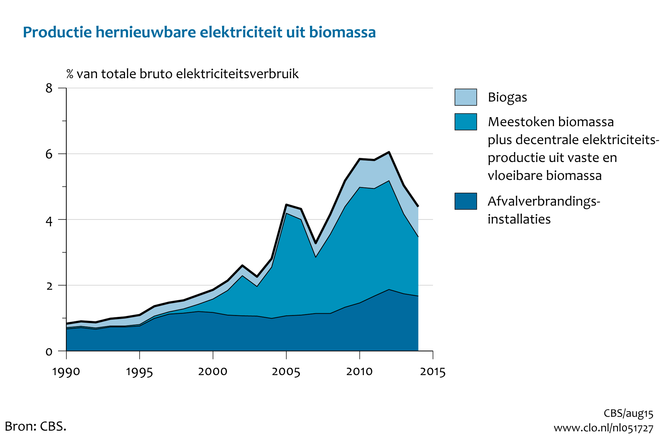 Because the Netherlands is part of the EU the Renewable Energy Directive also applies to them [10]. The goal of the RED is to have 20% of the used energy in the EU produced from renewable energy by 2020. The percentage of renewable energy production differs per country. For the Netherlands, this percentage is 14 [11]. This percentage and how the Netherlands plan to reach is all in energy agreement where 40 different stakeholders bind themselves to these goals. At the moment this is 7.3% so the chance of reaching this goal within a year is very slim.

In 2003 the MEP (Environmental quality of energy production) was introduced [8] [12]. It was a subsidy for producers of electricity from a renewable source, the application period ended in 2006 because the costs were quickly increasing and the goals of 9% renewable energy by 2010 were almost reached. The MEP subsidy was valid for ten years max. The number of subsidy producers got depended on the type of electricity production.

After the MEP period had ended the SDE (Stimulation of sustainable energy production) was put in place in 2008 but it wasn’t until 2016 that the first application regarding biomass was accepted [10]. A few differences with the MEP include the fact that SDE also covers renewable gas and heat. Also, the amount of subsidy the producer receives depends on the prices of non-renewable energy, this means that when the prices of non-renewable energy decrease the amount of subsidy also decreases. Every year there is a set amount of money available for the SDE, for 2017 this was 12 million.

In 2012 the SDE+ was introduced which now has a set amount of subsidy regardless of the type of technology and the production of only heat is now also subsidised [8]. With the SDE heat production was only covered if it was combined with the production of power.

4. Evaluation of the effect of these measures

During the time that the MEP was implemented there was an increase in the use of renewable electricity, so the subsidy did what it had to do. Unfortunately, it ended pretty soon when the costs seemed to get out of hand. After this, you see a decline in the usage of renewable sources for energy production. Maybe with some better planning and a ceiling when it comes to the amount of money available, the MEP wouldn't have to be ended and the decline during the years between MEP and SDE wouldn't be as prevalent. It is difficult to say a lot about the effects the SDE+ has on the wood waste bioenergy market because there haven't been any reports on projects realised with the help of SDE+. But as it is a replacement for MEP it will probably achieve the same, which is good. I think with the goals set by the EU, the better awareness when it comes to climate change and the fast improvement of technology the bioenergy market will only grow in the Netherlands. I don't think that the goal of 14% set by the EU will be reached by 2020 because that would mean that we will have to double the bioenergy production within a year. Also, our current government is most of the belief that our small country shouldn't have to do a lot because other bigger countries barely do anything. We as the Netherlands should know better and should know that one country can make a difference, we were one of the firsts in different subjects like legalising gay marriage and euthanasia but when it comes to saving our planet we want to wait for the others to start.